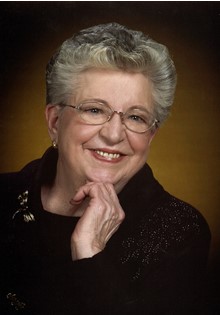 Guestbook 2
Anna M. Rich died at her home in Riverton on Tuesday, Nov. 13, 2007. She was 83 years old. Funeral Mass will be at 10 a.m. Monday, Nov. 19, at St. Margaret's Catholic Church in Riverton with the Rev. Father Drew Duncan officiating. Interment will be at 10 a.m. on Tuesday, Nov. 20, at Memorial Gardens Cemetery in Cheyenne. Rosary will be at 7 p.m. Sunday, Nov. 18, at the Davis Funeral Home of Riverton. Anna Margaret Huffman was born in Emblem Bench, Wyo., on March 21, 1924, the daughter of George and Dora (Kaiser) Huffman and the youngest of eight children. She was graduated from Worland High School with the Class of 1942.On June 7, 1942, she married Francis E. Rich in Worland. Mrs. Rich retired from the Laramie County Treasurer's office in 1987, after more than 20 years of service. She moved to Riverton from Cheyenne in 1993 to be closer to family. Mrs. Rich was a member of St. Margaret's Parish. She is survived by two daughters, Marilyn A. Gillespie and her husband Frank of Rochester, N.Y., and Kathleen Marie Helton and husband Albert of Dubois; a sister, Bernice Bosch of Worland; five grandchildren, Dawn and John Martin and Jenene and Andrew Heyer, all of Rochester, N.Y., Corey and Marilyn Helton of Hobbs, N.M., Shane and Donna Helton of Loma, Colo.; 10 great grandchildren, one great-great grandchild, and numerous nieces and nephews. She was preceded in death by her husband; a daughter Evelyn Marlene Burgess, and granddaughter, Leshelle Helton. Services are under the direction of the Davis Funeral Home of Riverton.