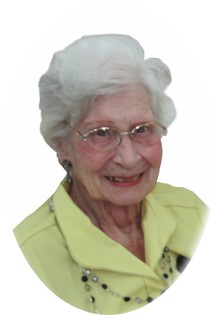 Guestbook 4
Funeral services for Kathryn Gay, formerly of Riverton, will be conducted at 10:00 a.m. Monday, January 14, 2013 at the Davis Funeral Home in Riverton, with Pastor Mark Thurman officiating. The final resting place is at Mountain View Cemetery in Riverton, Wyoming.

Emma Kathryn Hall Gay was born March 27, 1920, to Robert and Viola (Fitzgerald) Hall in Hoisington, Kansas. Kathryn’s grandparents pioneered and homesteaded near Hoisington, coming from Illinois in a covered wagon. During her young life, she experienced the dust bowls of Kansas and the depression years. Kathryn graduated from Hoisington High School in 1938.

Kathryn married George Raymond Gay on May 1, 1940, in Hoisington, and they made their home in Russell, Kansas. In 1946, they were transferred by Standard Oil and Gas to Wyoming. Over a period of 38 years they made their homes in Casper, Lander, Winkleman Dome, Riverton, Beaver Creek, Midwest, Cody and back to Riverton. In 2003, Kathryn moved to Longmont, Colorado to be near her daughter, Kathleen. In 2006, she moved to Woodbine, Iowa to be near her daughter, Ramona.

Kathryn was a faithful member of the United Methodist Church. She was a fifty plus year member of the Order of the Eastern Star serving as a Worthy Matron of the Riverton Wyoming chapter and Worthy Grand Matron of the Grand Chapter of Wyoming 1977 - 1978. She was a member of Daughters of the Nile, Sahida Temple, Sheridan, Wyoming and Past Matrons Club of Riverton, Wyoming. She also served on many local organizations over the years.

Kathryn was a dedicated homemaker for her family, loved the outdoors, especially camping, fishing and boating with her family. She also enjoyed gardening, playing bridge, tole painting, reading, crocheting and vacations on cruise ships.

Kathryn was preceded in death by her parents; husband, George Gay in 1978, and brother, Elmer Hall.