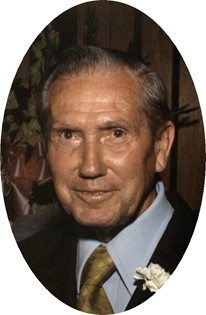 John Schilling, 99, of Riverton passed away on Tuesday, January 29, 2013 at Riverton Memorial Hospital.

Services will be held at 2:00 p.m. on Tuesday, February 5, 2013, at Davis Funeral Home, with the Rev. Echo Klaproth officiating. Military rites will be provided by the Friday- Truan Detachment #683, Marine Corps League and Veterans.

John Schilling was born September 5, 1913 in Sherbin, Minnesota to German immigrants Johanas and Carolina Mintz Schilling. John was one of 11 children. He started working in the fields at the age of seven. As a young man, he worked trap lines to pay for his first horse and later in the Cheyenne bomber plant.

In 1943 he followed the lead of four brothers and enlisted to fight for America in WWII. He served in General Patton’s Third Army with the 39th infantry regiment 9th division nicknamed “The Old Reliable” or “Hitler’s Nemesis”. John fought in the North Africa, France, Belgium and Germany campaigns. He fought in the Normandy Invasion, Battle of the Bulge and the Bridge at Remagen.

The son of German immigrants, he was able to understand and speak German. Therefore, one of his duties was acting as an interpreter. He was honorably discharged as sergeant on March 5, 1946.

Upon returning home from the war, John married Edna Louise Dennis in Casper, Wyoming on February 24, 1947. He supported his wife and three children by operating his own dump truck.

He loved his vehicles and even washed and polished his dump truck. Loved his sweepstakes and would often say, “If I win, none of you kids will ever have to worry.” Us “kids” are still waiting for the knock at the door.

His strength and courage got him through many challenges. He was a great source of inspiration to his family and taught all of us the power of commitment, the importance of family, and how to get by in a less than perfect world.

He was preceded in death by his wife Edna of 65 years, his parents, eight brothers and two sisters.