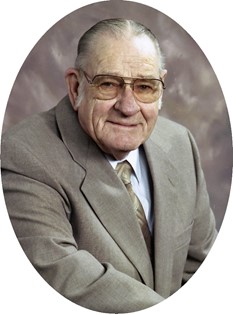 Services for Herbert K. Lehman will be held on Monday, February 25, 2013, at 10:00 am at the United Methodist Church in Riverton, WY with Reverend Mark Thurman presiding. Burial will follow at Mountain View Cemetery in Riverton. Mr. Lehman passed away Thursday, February 21, 2013, at his home.

Herbert K. Lehman was born August 21, 1928, on a farm near Broadwater, NE in the same house as where his mother had been born. He was the third child of Eles E. and Lottie C. (Ruby) Lehman. He was educated in rural schools in Nebraska and graduated from Bridgeport High School in 1946. He joined the U.S. Army after high school and served with 32nd Infantry Regiment, 7th Division in Seoul, Korea. After receiving an honorable discharge from the service, he attended the University of Nebraska and received his degree in 1952.

Herb married Kathleen Manthei on October 7, 1951, and together they raised two children, Randy and Lori. She preceded him in death on September 17, 1981. He married Clara A. Carroll on July 25, 1984, she survives him.

Herb worked for a short while as a sports writer and photographer for the Kearney, NE Daily Hub. He purchased a small photography studio in Bridgeport in 1953. After selling that studio her moved to Riverton, WY in 1955 and operated his first studio upstairs in the old “Peter’s” building across the street from the post office. He built the present-day Lehman Studio in 1959 and owned and operated in until 1992 when he sold it to his son, Randy Lehman. Herb was active in civic affairs, serving as a city council member, president of the Eagles Aerie in Riverton and was a life member of the Riverton Elks Lodge and VFW. He was one of the founders of the present Wyoming Photographer’s Association and served in all the offices of that organization as well as all the offices of the Rocky Mountain Photographer’s Association. He also served as the Wyoming delegate to the Professional Photographers of America for ten years. For many years he enjoyed hunting, fishing, skiing and golfing. He often stated that he had been born at just the right time and “had hit it just right!”

He is survived by his wife, Clara; his sister, Eunice VanScoy of Las Vegas, NV; his son, Randy Lehman and companion Tracey of Riverton; his daughter Lori Gimmeson and her husband Brant of Aurora, CO; stepchildren, Kathleen Welch of Billings, MT; Jodi Edwards and her husband John of Riverton; Dirk Carroll and his wife Melissa of Riverton and Quinn Carroll and his wife Theresa of Cheyenne. His also survived by twenty two grandchildren and six great-grandchildren.

He was preceded in death by his parents; his sister Claire Crossman and her husband Sam; his brother Donald Lehman and his wife Jeanette; his brother-in-law Ronald Van Scoy and granddaughter Annie Jo Welch.

Donations for the Herb Lehman Memorial would be appreciated, in care of the Davis Funeral Home, for a memorial to be placed at the Riverton Country Club.