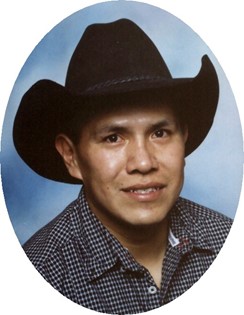 Sterling John Howell, Sr. was born on July 2, 1976, in Riverton, to Gordon Howell and Julia Brown.

He was a member of the Native American Church and practiced the Arapaho Traditional Ceremonies. He was also of the Catholic faith.

He attended grade schools in Arapahoe and St. Stephens. He graduated from Wyoming Indian High School in 1994. He then went to Southwestern Indian Polytechnic Institute for a year on a running scholarship for the Cross Country Team. While in high school he was a Senior Class Representative for Student Council and in the Art Club. He was the first student ever to be a part of a presentation in Washington D.C. called “Chapter II National Conference on Education” for his artwork. He represented the state of Wyoming and Wyoming Indian Schools. He was also Wyoming Indian High School first Cross Country State Champion in 1992. In 1990 and 1992 his Cross Country Team were the State Champions. He was very well known for his running, in the state and nationally. Receiving numerous awards, medals and plaques for his outstanding achievements. He moved to Albuquerque, NM in November of 2003 and stayed until June 2011.

His family said that he enjoyed the “cowboy life”, riding horses, breaking horses, a saddle bronc rider, the arena director for the Joe and Eileen Moss Memorial Rodeo. He also was involved in track and field and was a cross country runner, and loved basketball. His passion was art and he enjoyed it everyday.