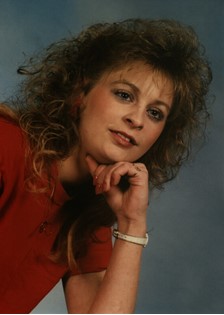 Guestbook 4
Michelle L. (Locker) Mayo was born in Scottsbluff, NE on December 27, 1975 to Michael and Rena Locker. She spent much of her young life on her grandparent’s farm and her granddad’s ranch. There was no end to the things she could get into and mischief to make along with her cousins.

She lived in Scottsbluff area until the age of 10 when her family moved to Riverton, WY.

When she was young she attended the Seventh Day Adventist Church.

She married Bill Mayo on April 15, 1994 and moved to Casper, they divorced in 2012. During their marriage they were blessed with three sons.

During her life in Casper and Riverton she was blessed with many great friends, many who become like family, but even with her extended family, her sons were her life.

She became ill in 2002 and in 2003 she was diagnosed with a rare lung and heart condition. A condition she fought hard against until she lost the battle on March 8, 2013.

Those that really knew her loved her.

She is survived by her sons, Kyler Reid, Kolton Thomas, and Kaden Michael; her parents, Michael and Rena Locker; her brother, Michael Russ and wife, April Locker; her niece, Alyssa Michelle Locker; her nephew, Michael Peyton Locker; and numerous aunts, uncles, and cousins.

She is preceded in death by her grandparents, Roy and Nellie Bell and Milo and Ruth Locker.