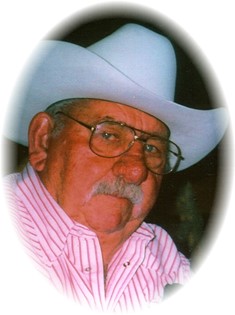 Leo F. Harrington was born in Stuart, Nebraska on April 10, 1929 to Fred Harrington and Pearl Cadwalder. Leo was the third of seven children (six boys and one girl). The city of Stuart was recognized for being a farming, ranching, and construction district during this time. The family moved around several times during Leo’s childhood. During these times Leo remembered his dad working as a ranch hand, a construction worker and as an oil field hand. These important times in Leo’s life helped to shape him into a true western cowboy with a hard work ethic and family values to go with it. His family eventually settled into the town of Lance Creek, Wyoming where Leo attended school until the eighth grade. They then moved on to Manville, Wyoming where Leo graduated High School in 1947.

After graduation, Leo worked in the Lance Creek area for a pipeline construction company. On September 18, 1951, Leo was injured in a pipeline accident where his left leg was crushed and broken. His leg became infected, eventually leading to gangrene, and his leg was amputated above the knee, at the age of 21 years old. Even though this was a tough time for Leo, he was determined to live a normal life and to continue to work hard to enjoy his western lifestyle, even in the face of this adversity. After the accident, Leo moved around the country where there was work to be had, settling into the Wind River Valley in the spring of 1956. Many members of his family had permanently put down roots in the Riverton, Wyoming area, including his parents, and his brothers Ed, Jim, Mickey and Freddie. Leo gained employment in the Gas Hills Uranium district as an equipment operator.

Leo met the love of his life, Helen Joan Lough through an association with her parents, Harvey and Cora Lough. Harvey was a heavy equipment operator for Fremont County and plowed the streets of Riverton with a team of horses and wagons. Leo married Joan in 1957 and began his family. First came daughters LeeAnn, Phyllis, and then Sandy. Finally Joan and Leo got their boys, Justin (JD) and Kevin, to complete their family. In 1969, Joan became sick with a terminal illness and there were many hardships during the next couple of years as her illness ran its course. Joan passed away in 1971, which was very hard for Leo and the children. During this time Leo worked full time, visited Joan in the hospital in Casper as often as he could, and continued to provide for and raise his family. There was a lot of family and community support to help Leo and the kids, and many of these relationships are still cherished to this day.

In 1981, Leo married Nadine Soles and she became a big part of his, his children’s and his grandchildren’s lives. Nadine worked very hard to fulfill the role of stepmother and grandmother. It took a while for the kids to warm up to Nadine, but she was stubborn and loving and eventually she earned her way into each and every one of their hearts. She was always there to help with chores around the place, cook a good warm meal, to help feed the animals, and always enjoyed a good laugh and plenty of time with the children. She especially enjoyed an afternoon of fishing. Nadine was very supportive of all of the grandchildren in all of their school activities and attended as many functions as often as possible to support her family.

Leo continued to work in the Gas Hills for several companies to finish up his career as an equipment operator. He worked for Maco Construction, Federal Partners, Union Carbide and eventually retired from Lucky Mac in the spring of 1986. After retirement, Leo enjoyed spending time at his place south of Riverton next to the little Wind River. He had horses, a few cows, several good dogs, some chickens, and an array of farm animals over the years. He enjoyed teaching his grandchildren the way of the west, there was always a roping steer in the yard, boots and spurs in the entryway, and a good adventure to be had if you had the chance to spend the day with Grandpa Leo. Leo had a number of Cowboy buddies that he would spend time with. He was always there to lend a hand to a neighbor. He ran around with Rasty Givens, Ron Crowford, Willie LeClair, Bubba LeClair, Frank Miller, Joe Henry, Phil Lavoie, Daryl Winfield, Manual Roman, Big Rock Shakespeare, and many more.

Leo is survived by his daughter LeeAnn Charpentier and her husband Steve of Lignite, North Dakota, a daughter Phyllis Whitlock and her companion Justin LaJeunesse of Kinnear, Wyoming, a daughter Sandy and her husband Richard Larsen of Riverton, Wyoming, a son Justin (JD) and his wife Frannie Harrington of Holly, Colorado and a son Kevin and his wife Laura Harrington of Riverton, Wyoming. He has 17 grandchildren and 14 great-grandchildren.

Leo was preceded in death by his father Fred Harrington, his mother Pearl Cadwalder, his siblings, Daryl, Mickey and Ed Harrington, his spouses Helen Joan Harrington and Rita Nadine Harrington, and a grandson Justin Daniel Harrington. Memorials may be made to Help for Health Hospice in care of Davis Funeral Home. Following the service, a reception will be held at the Elks Lodge in Riverton Wyoming.