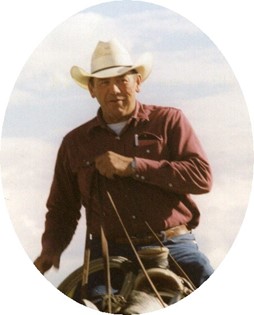 Guestbook 11
James "Jim" Fike, Jr. of Pavillion died at his home Friday morning, Nov. 30, 2007, at the age of 59. Memorial services will be at 11 a.m. Wednesday, Dec. 5, at the Crowheart Community Center with Pastor Cleve McSwain officiating. James Fike, Jr., was born in Riverton on June 30, 1948, the son of James Fike, Sr., and Mary "Kitty" (Stagner) Fike. He was an enrolled member of the Shoshone tribe and life-long rancher and Fremont County resident. He was graduated from Morton High School and earned a B.S. degree from the University of Wyoming. He spent his childhood and most of his adult life on his ranch on Dry Creek on the Wind River Reservation. For the past 15 years, he ranched from his place west of Pavillion. He was a veteran of the Viet Nam War. On Nov. 3, 1967, he married Diane Smith in Cody. Mr. Fike was a member of the Pavillion Methodist Church, its Men's Group and served on the Advisory Board. He also served through the FCA. He was a member of the Central Wyoming College Rodeo Booster Club and served as arena director for the Wind River High School Rodeo 1984-97. He was a member of the Wyoming Quarter Horse Sale committee for the past 25 years. He had served as a member of the Fremont County School District #6 Board of Education for many years and was instrumental in the building of the Wind River High School. In addition he worked for seven years as home-school coordinator for the Wind River School District of Pavillion. His family said Mr. Fike enjoyed training horses, fishing, camping, and spending time with his grandchildren. Survivors include his wife, Diane Fike of Pavillion; son, Todd Fike of Fort Collins, Colo.; daughter, Wendy Jones of Phoenix, Ariz.; six grandchildren, Addie Fike, Lillian Fike, Claira Fike, Ellie Jones, Marlee Jones, and Landon Jones; sisters, Kaye Stoll of Crowheart, Kathy LeClair of Grants, N.M., and Judy Schultz of Cody He was preceded in death by his parents, Jim and Kitty Fike of Crowheart. Memorials may be made to the Little Wind Hospice or the Wind River Cancer Center in Ethete, in care of the Davis Funeral Home, 2203 West Main, Riverton WY 82501. On-line obituaries are available and condolences for the family may be made at: thedavisfuneralhome.com Services are under the direction of the Davis Funeral Home of Riverton.