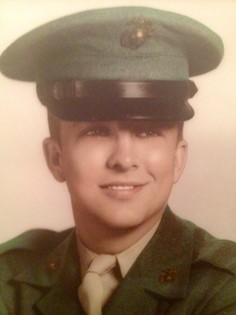 James Leroy Merrill was born October 25, 1937 in Duncan, OK. Formally of Central, LA, Jim lived the last twenty years in Lander, WY. Jim passed away on Sunday, March 17, 2013 at Help for Health Hospice Home in Riverton, WY. He was a United States Marine, Baton Rouge Shriner, and member of the BLE and Big R Club after retiring as an Engineer from the Illinois Central Railroad in Baton Rouge, LA. He also was a member of United Baptist Church in Riverton, WYO and a 'regular' at the Lander Senior Citizens Center as well as active player with his weekly card buddies. His passions were his family, deer and elk hunting, card playing, Harley Davidson motorcycle riding and emailing daily those he loved so much.

Visiting at United Baptist Church, 1201 E Pershing Ave, Riverton, WY, on Thursday, March 21, 4 p.m. until the Celebration of Jim's life begins at 5. Immediately following, family will scatter and spread ashes in the desert, at sunset.

The family requests donations in lieu of flowers to be made towards the medical benefit for Jim's step-great grandson, Cody Lawrence, in PawPaw Jim Merrill’s memory. Checks should be made payable to Cody Lawrence and mailed to MERRILL, 6541 Cameron Peak Court, Las Vegas, NV 89156. Donations may also be made direct online: http://www.youcaring.com/medical-fundraiser/Diabetic-Alert-Dog-For-Cody/38496

Please take a minute to leave a message in the online guestbook: http://www.caringbridge.org/visit/jimmymerrill/guestbook