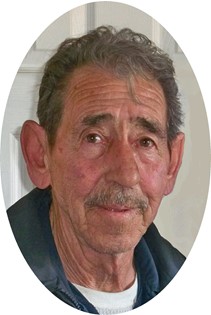 Frank died March 26, 2013 at the Riverton Memorial Hospital surrounded by family and loved ones.

He was born on December 15, 1935, in Cimarron, New Mexico, son of Brigido and Angelica (Moya) Vigil. Frank moved to Riverton with his family in 1950 from New Mexico to do agricultural work and attain his schooling. He remained in Riverton for the remainder of his life.

Mr. Vigil married Norine Duran and had 6 children from this union. They later divorced, but remained close friends.

He worked as a carpenter and later as a superintendent for several construction companies in Riverton. He was known to be a good finish carpenter and enjoyed repairing small engines, home repair and yard work. He was an excellent woodworker and made several intricate wood-gear pendulum clocks.

Mr. Vigil was a member of the Fraternal Order of Eagles.

He was preceded in death by his parents, 2 brothers, Dan and Bonefacio Vigil; his sister, Beneranda Hernandez; and great grandson, Seanan Daly.