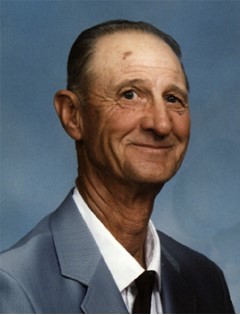 Guestbook 3
Vernon “Vern” Groathouse, 92, of Riverton died on Thursday, April 11, 2013 at Wind River Health Care. Service will be held on Saturday, April 20, 2013 at 1:00 pm at Trinity Lutheran Church with Pastor David Magruder officiating. Burial will follow at Mountain View Cemetery. A viewing will be held on Friday, April 19, 2013 from 5:00 pm to 7:00 pm at Davis Funeral Home.

Vernon Orval Groathouse was born on August 1, 1920 in Fairbury, NE to George and Ethel (Harrington) Groathouse. He spent his younger years living in southeastern Nebraska before the family moved to Wyoming. He attended schools in Fremont County and worked on the family farm.

He served in the Army during World War II. He was a member of the VFW.

On November 10, 1946 he married Hilda Haun in Riverton. Together they raised two boys and one girl. He worked for the Bureau of Reclamation and at the Uranium mines in Jeffery City. Later he worked for the School District in Laramie, WY for 30 years before moving back to Pavillion in 1985 where he worked for the town of Pavillion. A few years later he finally fully retired. In 2005 he and his wife, Hilda, purchased a home in Riverton and moved to the city. In 2010 they both moved to Homestead Assisted Living where they both lived until Hilda passed in November of 2010.

His family said that he loved to read western books, Louis L’Amour being one of his favorites. He also enjoyed getting outdoors, fishing and camping. Playing cards were an extra curricular activity that he thoroughly enjoyed and his favorites were pinochle and cribbage. Above all things he truly enjoyed having a cup of coffee and visiting with family and friends.

He is survived by his sons, Robert Groathouse and James Groathouse both of Riverton; his daughter, Jeannie Groathouse- Hiltz of Salt Lake City, UT; his grandchildren, Shannon and John Christensen, Dhana and Julie Groathouse, Rachella Hiltz, and Kevin and Misty Hiltz; and 7 great grandchildren.

He is preceded in death by his parents; his wife; and three brothers, Earl Groathouse, Charles Groathouse, and Perle Groathouse.

Memorials may be made to Homestead Assisted Living in care of Davis Funeral Home.