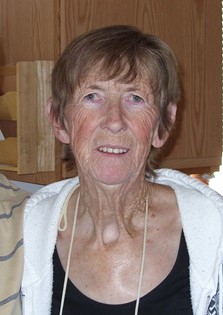 Guestbook 6
Annette Schur, 75, of Riverton, died at Riverton Memorial Hospital on Thursday, April 11, 2013. As were her wishes, cremation will take place after the service. A viewing will be held at 9:00 am before the service. A memorial service will held on Wednesday, April 17, 2013, at 10:00 am at Davis Funeral Home. Pastor Doug Hill will officiate.

She lived in the Spokane, WA area until eighteen years ago when she moved to Riverton. While in Spokane, she worked as a welder for Apollo Boat, a nurse, and caregiver. After coming to Riverton she worked at Pro Tec and for the last few years was a caregiver.

Her family said she enjoyed astronomy, rock hunting, hiking, beadwork, and crafts. She also volunteered at Amedisys Hospice and Habitat for Humanity.

She was preceded in death by her parents, Clark and Belva Martin, and one sister, Laura Martin.

Memorial may be made to Amedisys Hospice or Habitat for Humanity in care of Davis Funeral Home.