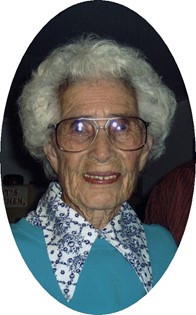 Hazel Portwood Schlenske was born on September 25, 1917 to Jess and Esther (Collins) Chamberlain on the Wind River Reservation. She was the oldest of 13 girls. She helped in raising her younger sisters. At the time of her death, Hazel was the oldest living enrolled member of the Northern Arapaho Tribe.

Hazel loved spending time with her family of which they all enjoyed listening to her many stories. She loved working in her yard, camping, fishing, and making dolls. She often spoke of the Indian Way and how proud she was of her Indian heritage.

She was preceded in death by her parents; her husbands; 9 sisters; son-in-law, Travis Bennett, and grandson, Rocky Hunsberger.