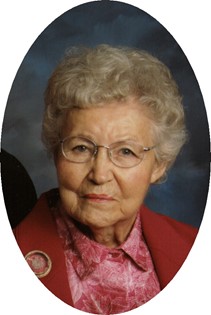 Guestbook 4
Josephine King, 82, of Riverton died Thursday, April 25, 2013, at Casper Medical Center. As were her wishes, cremation has taken place and there will be no service held.

Mary Josephine Jons was born on October 2, 1930 to Henry Brumm and Mary Josephine (Irby) Jons on the Scott/Jons Ranch near Daniel, WY. She was the oldest of four girls. She attended several rural schools as well as schools in Pinedale and Laramie. She graduated from High School in Montello, NV. She also attended the University of Wyoming.

After her father was killed, her mother moved the family to Riverton in 1948. She worked at the Temple Drug Store then was employed at Gilpatrick Road Construction Co. for 40 years as the accounts receivable clerk and receptionist. The company crushed aggregate material at its Riverton gravel pit, and one of her jobs was to dispense gravel. Her many customers referred fondly to her as “Gravel Gerty”. She baked cakes every month to celebrate the employee’s birthdays, which they looked forward to.

On November 17, 1957, she married William “Bill” King in Riverton. They made their home on the outskirts of Riverton where they had a large yard that was a pride and joy for them. After retirement they moved to the Homestead Senior Housing Complex in Riverton. Her beloved husband passed in November of 2009 and she continued to live in their home until her passing.

Her family said that “Joey” as her family called her, was always there for everyone in the family. As the oldest daughter she took on the role of “mini mom” after her father died and her mother had to assume the role of breadwinner and manager of the family. By doing this she made things easier for the whole family. She was a very good cook and even though all the sisters took turns in the kitchen; she was in their eyes, the best. Carrying on with that tradition, her family said she loved special occasions and they were always made exceptional when she was in charge. Her sisters always looked up to “Joey” and one of them, Eileen Coursey, even wrote a poem to honor her. SISTER/MOTHER When widowed mother became breadwinner, oldest sister assumed the role of mini-mom and baked from scratch angel food cakes for our birthdays and decorated the Christmas tree. She scrubbed my tomboy dirty knees, curled my hair and gave up part of her childhood so I could enjoy mine. When I got older I borrowed her clothes and once I wore her brand new sweater without asking. Even now when I visit, she does my laundry and bakes my favorite applesauce cake. She is survived by her sisters, Patti Anderson of Riverton, Kay Roelfsema, and Eileen (Wayne) Coursey, both of Iowa, and numerous nieces, nephews, and friends.

She was preceded in death by her parents, Henry and Mary Jons, and her husband, William “Bill” King.