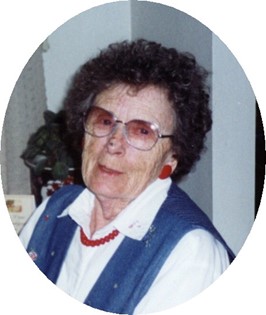 Guestbook 1
Freda Conrad, 96, of Riverton died on Sunday, April 28, 2013, at the Good Samaritan Care Facility of Arapahoe, NE. Services are scheduled for June 4, 2013 at 2:00 pm at Davis Funeral Home. Pastor James Moshier with Trinity Lutheran Church in Arapahoe, NE will officiate. Internment will be at Mountain View Cemetery.

Freda Beatrice Ferguson was born on September 21, 1916 on the family farm near Iberia, MO., to Herbert and Bertha (Martin) Ferguson. She grew up in Missouri with her two brothers.

On August 19, 1933 she married James Conrad in Clinton, MO. In 1953 the family moved to Riverton. She worked as a farm wife raising her family. Later she worked at the Post Office in Big Piney, at the Riverton Ranger in the Print Shop, and at tourist shops in Jackson, WY.

Her family said that she and her husband enjoyed going to Washington D.C. to stay with her daughter and family for 3 months during the winter and seeing all the history. Some of her interest were sewing, collecting stamps, quilting, fishing and hunting, and especially her fall trips to the Grand Tetons and staying at Jackson Lake Lodge, which her husband helped build. Above all she loved spending time with family, her daughter, grandchildren, great grandchildren and great great grandchildren.

She was preceded in death by her husband, James in January 1980; her parents, and her brothers, Bill and Bob Ferguson.

Memorial may be made to Riverton Senior Center in care of Davis Funeral Home.

Services are under the direction of Davis Funeral Home of Riverton and the Wenburg Funeral Home of Arapahoe, Nebraska. On-line condolences for the family may be made at www.TheDavisFuneralHome.com.