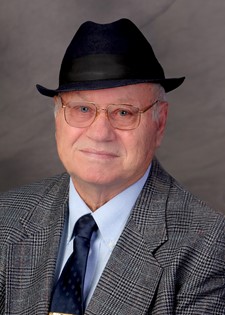 Guestbook 3
Alfred Adam Weber, 82, passed away on Sunday, June 2nd, 2013 at his home west of Riverton, Wyoming. The first of six children, he was born on April 24th, 1931 in Wellington, Colorado, to Adam and Olinda (Fabrizius) Weber. Alfred grew up in Arapahoe, Wyoming, later attending Riverton High School until his graduation. After high school he farmed with his father in Arapahoe for several years. Alfred and his wife, Nadine Katherine Knoll, were married on December 9th, 1963, at St. Paul’s Methodist Church in Riverton. Fifty years later, on December 9th, 2012, they invited family members to join them for their golden wedding anniversary, to celebrate their many years of happy marriage. Following the closure of St. Paul’s Church, Alfred and Nadine joined St. John Lutheran Church, where they have been members for 45 years. Alfred and Nadine moved to their own farm in Missouri Valley in 1963, where Alfred enjoyed building his successful farming operation, and raising his family. He expanded his farm to include acreage in Paradise Valley, raising cattle, hay, beans, barley, and sugar beets. He had been joined in his farming operation by his son Roger, and his son-in-law Dan Forbis. With his family, Alfred enjoyed fishing on the family farm, as well as camping, hunting, and fishing in the nearby mountains. He is fondly remembered for the strong support he gave his family in their many endeavors, enjoying their motorcycles and music, and encouraging their college and careers. After his retirement in 2006, Alfred and Nadine moved to Riverview Heights, where they have lived with their son Roger and enjoyed the spectacular views of the Wind River Mountains Alfred so loved. Alfred was preceded in death by his parents, Adam and Olinda Weber, and brother Robert Weber. He is survived by his spouse Nadine of Riverton, his son, Roger, of Riverton, daughter Karla Forbis and husband Dan, of Riverton, his brothers Richard (Carole) of Riverton, and Paul (Lanae) of Riverton, sisters Clara (Richard) Doering, of Riverside, California, and Alice (Dennis) Rosburg, of Riverton, and his sister-in-law Edna Weber of Arapahoe, his grandchildren Sabrina and Brent Forbis, of Laramie, Wyoming, nieces, nephews and other relatives. A viewing will take place at Davis Funeral Home in Riverton on Wednesday June 5th from 6pm to 8pm. The funeral service will be held at St. John Lutheran Church, at 606 North 8th Street West, Riverton. WY, on Thursday, June 6th at 2:00 PM. Burial will follow at Mountain View Cemetery, with a reception afterwards at St. John Lutheran Church. In lieu of flowers, memorial donations can be made to an organization of the donor’s choice.