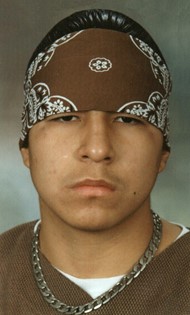 Guestbook 1
Dwight “Moody Bluez” Spoonhunter, Sr., 28, of Arapahoe, died at Riverton Memorial Hospital on Sunday, June 9, 2013. A rosary will be held on Friday, June 14, 2013, at 7:00 p.m. at Great Plains Hall. A wake will follow at 331 Great Plains Road. Funeral Services will be held on Saturday, June 15, 2013 at St. Stephen’s Catholic Church. Father Phil Wagner will officiate. Burial will follow at Arapaho Catholic Cemetery.

He was a life long resident of the Wind River Reservation. He worked as a laborer, roofer, janitor, and was an entrepreneur.

He was involved with basketball, weight lifting, hunting, fishing, football, drawing, drumming, and the Native American culture. His family said he loved spending time with his family, camping, and busting freestyles.

He was of the Catholic Native American Church. He was very involved with the Northern Arapaho ways.