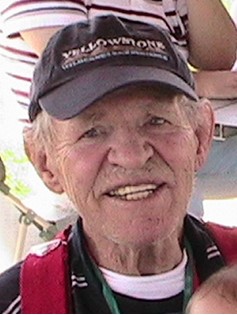 James Kenneth Morrison was born on August 1, 1927 in Denver, CO to Henry Kenneth and Helen Marie (Reese) Morrison, their only child. His mother died when he was very young and his father was unable to care for him so he went to live with his maternal aunt Flora Reese until 1936 when he became a resident of Wyoming Life Resource Center (W.L.R.C.). Just this year he was given an award for being the oldest living resident of W.L.R.C.

His adopted family and guardians, Darwin and Duffy Glasgow, said that he loved holiday gatherings, visiting with people, being with his adopted family, horses, dogs, and trains. His favorite holiday was Christmas and if he could have had it 365 days a year he would have.

He is survived by: the staff and residents of the 500’s, his adopted family, Darwin and Duffy Glasgow, Tritean and Dave Grover, Ron Glasgow, JJ Grover, Lane Grover, Jacob Grover, Delean Bindl, Veronica and Robbie Hitshew and sons, Abby and Cassidy Irvine and their children, and Julie and Jason Purvis and their son, Delby and Monte Wright and family, Dartha and Tito Rivera.

He was preceded in death by his parents, Henry and Helen Morrison and his guardian, Pat Wilson.