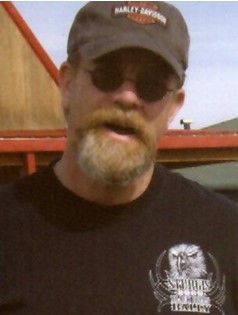 Guestbook 11
James “Jim” Burrell, 57, of Riverton died at his home surround by his family on Thursday, July 18, 2013. Cremation has taken place as where his wishes. No services will be held.

James Franklin Burrell was born on June 16, 1956 in Douglas, WY to Franklin Andrew and Norma Jean (Hageman) Burrell. He attended schools in Douglas and graduated from Douglas High School with the class of 1974.

His family said that he liked to be on the move and lived in Texas, Montana, Rock Springs, Douglas, Cody and Green River. He had lived in Riverton for the last 11 years. The family said that Jim had a big heart and gave all he had to many people. He was a loyal friend, loving husband and loved his family dearly. He will be missed by many.

He was a truck driver, heavy equipment operator and welder.

He was preceded in death by his mother, Norma Burrell.

Memorials may be made to Paws for Life in care of Davis Funeral Home, 2203 West Main Street, Riverton, WY 82501.