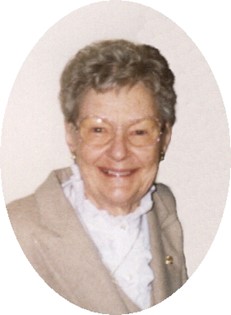 Guestbook 3
Lorene “Lory” Franklin, 84 of Riverton died at her home on Sunday, July 21, 2013. Funeral services will be held on Thursday, July 25, 2013 at 2:00 pm at Trinity Lutheran Church with Pastor Dave Magruder officiating. Internment will follow at Mountain View Cemetery.

She worked for State Mutual Insurance Company after college. She also worked as a secretary and switchboard operator for the Juvenal Courts in Cincinnati, OH. She was working and living in Oklahoma City, OK when she met Allen “Gene” Franklin, his aunt Ethel Wallace introduced them.

They were married on October 1, 1967 in Oklahoma City, OK at the Messiah Lutheran Church. She moved to Wyoming where she helped Gene raise his children after his first wife has passed away. She started working as a church secretary for Trinity Lutheran Church and worked there for many years before retiring.

Her family said that she enjoyed gardening, raising both flowers and numerous vegetables. She was involved with homebound ministries; she would take tapes of the church services to those unable to come to church. She gave many rides to and from church or town for those whom did not have transportation. Trinity School was very near and dear to her heart. She was constantly trying to help raise funds and help in any way she could. Her family said that one time she even donated her vacuum cleaner for a garage sale at the school and sent her son down to by it back for her. They said that she was funny, liked to tease, would have thrown her whole 85 pounds into the path of a grizzly bear to protect her “kids”, and actively prayed daily for those in need and never gave up on anyone and you might as well accept the fact that if she was praying for you, your life was going to change. Above all they said she was always more concerned about everyone else and their needs before her own.

She is survived by her daughter, Kathy Haas of Riverton; her son Brad and his wife Dawne Franklin of Riverton; her grandchildren, Matthew Franklin, Jacob Haas, Alicia Jaure and her husband Levon, and Kimberly Jones and her husband, Shea; her great grandchildren, Billie Jo Levy, Kordelia Jaure, Alexis Jones, Ezra Jaure, Austynn Jones, and Micah Haas.

She was preceded in death in by her parents, Martin and Marie; her husband, Gene; her sister, Irene Keilbarth, and her grandson, Michael Geraud Franklin.

Memorials may be made to Trinity Lutheran School in care of Davis Funeral Home, 2203 West Main, Riverton, WY 82501.