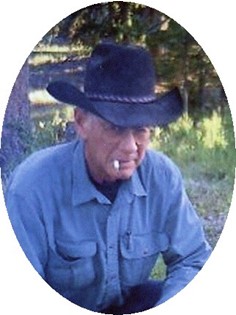 Guestbook 15
Funeral Mass for Thomas R. "T.R." Stalley of rural Riverton will be at 10 a.m. Friday, Dec. 28, at St. Margaret's Catholic Church in Riverton. The Rev. Father Andrew Duncan will officiate. Military honors will be by the Wyoming National Guard. Rosary will be at 7 p.m. Thursday, Dec. 27, at St. Margaret's Catholic Church. T.R. died on Saturday, Dec. 22, 2007, at Riverton Memorial Hospital. He was 62 years old. Thomas R. Stalley was born on Sept. 7, 1945, in Philip, S.D., the son of Thomas James Stalley and Betty (Siedler) Stalley. He attended Springfield (S.D.) State University and moved to Riverton in 1980. T.R. worked as a cowboy. He had been a lineman, building power lines, worked for Smith Tool and Dresser Atlas in the oil fields, and also served for a time as rodeo coach for Central Wyoming College. He ranched at the home place on Haymaker Draw north of Riverton and raised horses and punched cows in the mountains near Dubois. His family said T.R. enjoyed training horses and cow dogs, working the cow dogs, and rodeoing. He was a WRA all-around cowboy several times and had a special love for saddle bronc riding. The family said he loved playing with his grandson, Kail. He was a U.S. Army veteran of the Vietnam War. On Feb. 21, 1970, he married Patricia Foster in Valentine, Neb. Mr. Stalley was a member of St. Margaret's Catholic Church in Riverton. Survivors include his wife, Patti Stalley of Riverton; son, Colin Stalley of Riverton; daughters, Karie Suhn and her husband Randy of Riverton, Kelli Stalley of Goodwell, Okla., and Colleen Moorman and her husband Matt of Riverton; a grandson, Kail Suhn of Riverton; a brother, Jerry Stalley and his wife Sharon of Minnesota; sisters, Bev Mcneese of Belle Fourche, S.D., Connie Leek and husband Steve of Minnesota, Karmen Keppers and husband Denney of Minnesota, Lanna Norton and husband Dave of Arizona. He was preceded in death by his parents. Memorials may be made to Habitat for Humanity in care of the Davis Funeral Home, 2203 West Main, Riverton, WY 82501. On-line obituaries are available and condolences for the family may be made at: thedavisfuneralhome.com Services are under the direction of the Davis Funeral Home of Riverton.