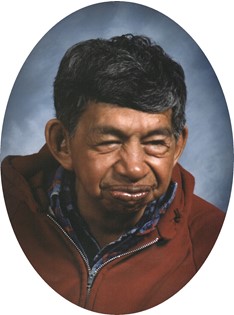 Cornelius Leo Warren was born on January 5, 2013 at Fort Washakie, WY to William Lawrence and Allie (Vanderbilt) Warren. He was given the Indian name “Gentle One”.

He attended school at St. Stephens when he was younger. At an early age he went to live at the Wyoming State Training School in Lander. He left there and moved into the community with Grace House. He eventually moved to Community Entry Services (CES) in Riverton where he lived a number of years before moving to their facility in Jackson Hole, WY. He finally settled in Riverton with the program where he lived and spent time with his friends.

He loved to work on crafts, beading, drawing, listening to music (Rock & Roll), dancing, going to Pow Wow’s, sweats, spending time with friends and family, traveling with Richard, going camping, and fishing. One of Corney’s dreams was to go to college and he did attend the college art classes.

He is survived by his sisters, Anita Portwood and Geraldine Brown; his brothers, Nelson and Crawford White, Alonzo and Nelson Moss, John Warren Sr., and Robert “Bob” Warren; his nephews, Raynold “Rastis” Nelson and Ted Thayer; his nieces, Cheryl McLaughlin, Randee Savage, Tina Dixon and Ione Jenkins; his grandchildren, Brett and William Groesback; his guardian and friend, Richard Keene; his family and friends at CES; and numerous other relatives.