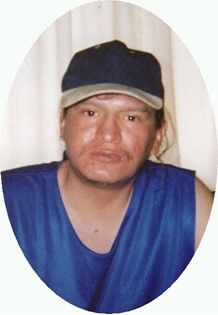 Guestbook 0
Kincaid Lee Duran was born on November 8, 1969 in Lawton, Oklahoma to Alfred J Duran, Sr. and Gloria Mae S. Eagle. He passed away on September 9, 2013 at the Wyoming Medical Center in Casper, Wyoming.

Wake Services and Native American Church Service to be held at Alberta Goggles home at 1180 17 Mile Road, Arapahoe, WY on Wednesday, September 11, 2103. Funeral to follow at Yellow Calf Cemetery in Ethete, Wyoming on Thursday, September 12, 2103 at 11:00 am.

Mr. Duran graduated from St. Stephens Indian High School in St. Stephens, WY. He enjoyed spending time with his family and friends. In his spare time he played at the Wind River Casino and loved drawing.