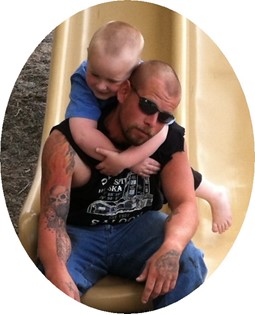 Guestbook 1
Steven “Steve” Mincey, 28 of Dubois died on Monday, September 9, 2013. Cremation has taken place, as were his wishes. A memorial service will be held at the Dubois Cemetery on Saturday, September 14, 2013 at 3:00 pm.

Steven Franklin Mincey was born on August 19, 1985 in Savannah, GA to Troy Franklin Mincey and Carla Tina Hodges. He grew up in Effingham County GA before moving to Wyoming in 2006. He attended Effingham County High School and graduated from Youth Challenge Academy in GA in 2004. He received his A.S. in General Studies from Central Wyoming College.

His family said he enjoyed listening to music and working to provide for his family. He loved the oilrigs and being a roughneck. Above all he lived for his boy Franklin and loved being with him. He was a man of few words but he was an amazing father, great husband, and a very good man; he will be greatly missed by all who were lucky enough to know him.

He was preceded in death by his maternal grandmother, Marian Hodges and his father-in-law, Robert “Bob” Claar.

Memorials may be made for his son's Education Fund: Franklin Lee Mincey in care of the Davis Funeral Home, 2203 W. Main, Riverton, WY 82501.