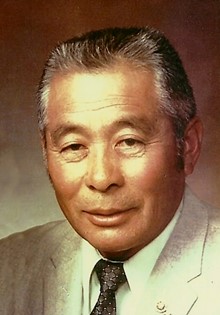 Tomio “Tom” Morioka passed away at his home in Green River, Wyoming on Thursday, October 3, with his daughter Peggy, son-in-law Robb and grandson Robbie at his side. Tom was 92 years old and would have turned 93 on Thanksgiving Day.

Funeral services will be held at 11:00 am, Wednesday, October 9, 2013 at the Davis Funeral Home in Riverton, followed by military graveside services at Mountain View Cemetery. Kris Schamber will officiate.

Tom was born in San Buenaventura, California, later renamed Ventura, on November 28, 1920, the son of Adaichi and Shizuko Morioka. He grew up in Ventura, graduating from San Fernando High School in 1939.

Tom joined the US Army in February 1945 where he served as an administrative NCO in the 69th Signal Battalion in Germany where he achieved the rank of Technical Sergeant. He was honorably discharged in October 1946.

His family moved to the Pavillion area in 1953, having a large produce farm on the Missouri valley road, then to Kinnear in 1964 before finally settling in Riverton in 1974.

Tom married Naomi E. Harris at the Methodist Church in Riverton on November 8, 1964.

Tom worked as a farmer, the Riverton Bowling lanes and later at Lucky Mc Uranium Mines until his retirement in 1983.

His family said he enjoyed gardening, hunting, fishing, camping, photography, woodworking, bowling and golf. He was an avid reader and a loyal fan of the Wyoming Cowboys and the Colorado Rockies. Tom enjoyed playing pinochle, cribbage and later in life dominoes with family. His greatest satisfaction came from spending time with his family, endless hours teaching grandchildren and great grandchildren the fine arts of fishing and hunting and also building a proper campfire.

Mr. Morioka was proud of the fact that he was a WWII Veteran and had the privilege of going on the Wyoming Honor Flight to Washington D.C. to see the WWII memorial in May 2011 with his daughter. He was also very proud to have sons and grandsons who served or are currently serving in the US armed forces.

Tom was preceded in death by his parents, two brothers, Kaz and Ted Morioka, and his wife, Naomi Morioka.

Donations can be made to Caringbridge.org under his name or to the Hospice of Sweetwater County Wyoming in care of Davis Funeral Home.