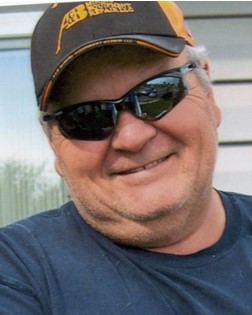 Guestbook 3
Funeral services for Forrest “Gus” Harris will be at 11:00 a.m. Wednesday, October 9, 2013 at Walker Funeral Home in Gillette, Wy with Pastor Doug Rumsey of the Antelope Valley Baptist Church officiating. Visitation will be from 2p.m - 9p.m. Tuesday October 8, 2013 at Walker Funeral Home. Services in Riverton, Wyoming will be at 2::00 p.m., Friday, October 11, 2013 at Davis Funeral Home with burial to follow in Mountain View Cemetery. Visitation will be from 5:00p.m. - 7:00 p.m. Thursday October 10, 2013 at Davis Funeral Home. Forrest “Gus” Harris, age 55, of Gillette Wyoming, made his journey home on October 5, 2013 after suffering a heart attack. Forrest Fredrick Harris was born May 21, 1958 in Lander, WY, the son of Martha Massie. He was known to his family and friends as “Gus”. He attended high school at Wind River High, where he enjoyed playing football, wrestling and track. He attended college at L.H. Bates Vocational Technical Institute in Tacoma, Washington where he received his certification in Diesel and Heavy Equipment Mechanics. Gus met Colleen Fergueson and later the couple married on October 30, 1976 in Pavillion, Wyoming. The family moved to Gillette in 1990 where Gus began working for Powder River Coal. He continued his work in coal and worked for Peabody Energy for twenty four years. Gus enjoyed spending time with his family especially his grandsons. He was their biggest fan and they could do no wrong in Grandpa’s eyes. He enjoyed fly fishing, bowling and life. He will most be remembered by his smile and sense of humor. Gus is survived by his wife Colleen Harris; son Forrest “Bowdie” Harris; daughter July (Mike) Lockhart; grandkids: Tyneisha Lippert of Kentucky, Jayden Harris, Jackson Harris, Xavier Harris, Xander Lockhart, Xabian Lockhart; grandmother Rose Harris of Ft. Washakie, one uncle, many cousins, nephews, nieces and many, many friends. Those he loved that he followed home to heaven are his mother Martha Massie, his grandfather Freddie Harris, which was his father figure, uncle Muck, grandsons Peter and Morgan and many cousins. A memorial has been established in Gus’ name. Memorials and condolences may be sent in care of Walker Funeral Home, 410 Medical Arts Court, Gillette, WY 82716.