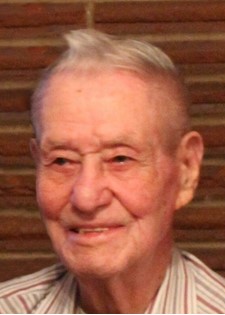 Guestbook 9
Lifelong Fremont County resident Bob Seipt passed away Sunday, October 27 at his home in Riverton, at the age of 95. His children Paul Seipt and Jean Younkin were with him when he died.

A Memorial Service will be held at Davis Funeral Home, Saturday November 2, at 10:00 a.m.

Robert Morris (Bob) Seipt was born January 7, 1918 in Lander, Wyoming to Henry M. (Dutch) Seipt and Ora E. (Jones) Seipt. As a child he lived with his family on the Hermitage, now the T-Cross, one of the first dude ranches in America.

He attended grade school in Dubois, and high school in Riverton, where Bob graduated in 1936. Bob then attended the University of Wyoming, where he graduated with a B.S. in Civil Engineering in 1941.

After his graduation, Bob entered the Army as an aviation cadet. He served in the Air Corps and Air Force throughout the Second World War, receiving his honorable discharge in 1946.

Bob married Pauline B. Brebrick, August 28, 1945 in Riverton, Wyoming. They celebrated over 53 years together, before Pauline's death in 1999.

From 1946 until 1955, Bob worked for the Bureau of Reclamation in Riverton as a civil engineer. Among other projects, he was influential in the design of the Pavillion and North Portal Projects. After leaving the Bureau, Bob was self employed as a land surveyor, helping to stake uranium claims in the Gas Hills, Shirley Basin, Green Mountain and working all over the state of Wyoming.

In 1958, Bob enrolled in the University of Wyoming College of Law. He graduated in the Spring of 1961, and was admitted to practice in August of that same year. He practiced in Riverton until his retirement. He first had a practice with Frank Hill and Gerry Spence. Later he practiced by himself, with his son-in-law, Tim Younkin and with the late Steve Avery. His practice was varied and he represented clients ranging from school districts to businesses to private citizens. Bob was first elected Justice of the Peace in 1966, and was re-elected two times, serving a total of 12 years.

Bob was preceded in death by his parents, his wife Pauline and his older brother Max Seipt.

Donations may be made to the Crohns and Colitis Foundation of America and Central Wyoming College Nursing Program in care of the Davis Funeral Home, 2203 W. Main Street, Riverton, WY 82501