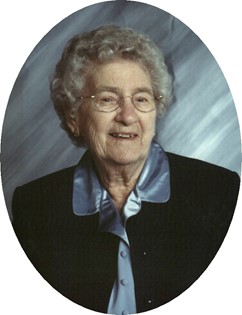 Hazel Ruth Allen was born on April 21, 1911 to Andrew and Edna (Mills) Allen near Ansley, Nebraska. After receiving her elementary and high school education, she attended Kearney State Teacher’s College. She then taught school in a one-room rural school. On January 24, 1931, she married Herbert Hollenbeck at Smith Center, Kansas.

They farmed in the Westerville, NE community until March 1942 when they moved to a farm in the Pavillion, WY area. After selling the farm in 1955 they moved to Riverton, bought property in the east end of town. They built and operated the Park Avenue Mobile Home Park for 11 years. Because of health problems they sold the court in 1968, built a home and retired on Riverview Road.

She was baptized in the Methodist Church at Westerville, NE and attended the United Methodist Church and Women’s Circle in Riverton. She was a homemaker and enjoyed her family of five children and her home. Hobbies included crafts, needlepoint, crocheting, reading, and gardening.

Besides her parents, she was preceded in death by her husband of 62 years, two sisters and two brothers, a son-in-law, and one great-great grandson.

Memorial donations may be made to the United Methodist Church or donor’s choice in care of Davis Funeral Home, 2203 West Main Street, Riverton, WY 82501.