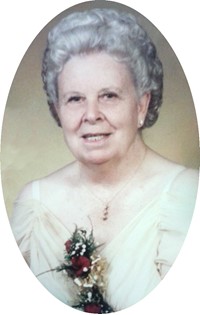 Elsie Lorraine Hogue was born in Riverton on July 6, 1918, to Burley M. Hogue and Nora Ellen (Herring) Hogue. Dr. Tonkin was the attending physician at her birth.

Mrs. Piggott grew up in Riverton, and was graduated from Riverton High School with the Class of 1937.

On October 27, 1940, she married William A. Piggott at St. James Episcopal Church.

The family moved to Northglenn, CO in September of 1963.

During her lifetime, Mrs. Piggott was a theater usher, worked at Wigwam Bakery, Top Notch Cafe, was a church custodian, and was active in the church and volunteered with the hospital guild. In Riverton, she taught Red Cross, was a member of the Busy Matrons Extension Club. In Northglenn she was also active in her church, TOPS, and 4-H, where Mr. and Mrs. Piggott won the Friends of 4-H award.

Lorraine loved Bronco games, and fishing and camping with her family in Jackson and Yellowstone. After her husband retired, the two of them loved going to Steamboat Springs, CO for peace time. She enjoyed family time all together such as birthdays and holidays. She was a servant to the Lord and many people, always delighting in helping others.

The family requests donations may be given to Phemie Backer for distribution to North Metro Fire Station 63.