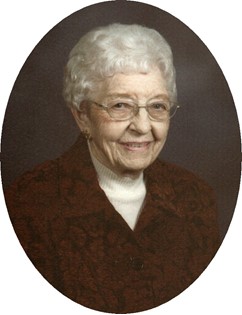 Guestbook 10
Mary Ellen Quam, 95, of Riverton, died on Wednesday, December 11, 2013, at the Help for Health Hospice Home. As were her wishes, cremation has taken place. A rosary will be held on Thursday, December 12, 2013 at 7:00 pm at Davis Funeral Home. A memorial mass will be held on Friday, December 13, 2013 at St. Margaret’s Catholic Church at 11:00 am with Father Demetrio Penascoza.

Inurnmnet will take place in the spring of 2014 with her husband at the Black Hills National Cemetery in Sturgis, S.D.

Mary Ellen Brich was born on December 10, 1918 in Miner County, SD near Howard SD to Frank and Martha “Nell” (Kellar) Brich. She was one of four children. She attended schools in South Dakota and graduated from Carthage High School with the class of 1935. She then attended the Sioux Falls, SD School of Cosmetology and graduated in 1942.

She was of the Catholic Faith.

She married Lewis Quam and together they raised nine children. While raising her family she also worked as a sales clerk for JC Penney.

She is survived by her sons, Ronald Quam of Denver, CO and Roger Quam of Mt. Vernon, IA, her step-son, Richard Quam of Rogers, AR; her daughters, Marilyn (George) Smith of Riverton, WY and Leah Henderson of Denver, CO; her step-daughter, Doris Adams of Colton, CA; her brother, Bernard Brich of CA; and several grandchildren, great grand children, and great great grandchildren.

She was preceded in death by her parents, her husband, two daughters, one son, one sister, and one brother.

Memorials may be made to the American Heart Association in care of Davis Funeral Home, 2203 West Main Street, Riverton, WY 82501.