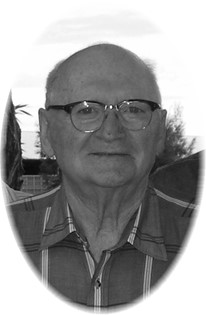 Guestbook 1
Harry H. Fegler, 90, beloved Father, Grandfather and Uncle, lost a very courageous fight with cancer on December 15, 2013. He passed at home in his favorite chair surrounded by his children, grandchildren and great grandchildren.

Harry was born September 30, 1923 in Bayard, Nebraska to Pete and Molly (Keller) Fegler. He was one of twelve children. Cremation has taken place.

Harry Fegler spent his growing up years on the family farm in Minatare, Nebraska, northeast of Scottsbluff. As a young man, he enjoyed going to dances with close friends at Lost Park, the Mitchell Fairgrounds, and the Lyman Hall and VFW in Gering. It was at a wedding dance that he met the love of his life, Irene Reichert.

Harry and Irene married on May 2, 1944. They first farmed in Nebraska on the Fegler family farm, but moved to Wyoming in 1945 where Harry worked on his cousin’s farm growing potatoes, sugar beets and beans. In 1946, they ventured out and rented their own land. By 1950 they were able to purchase the materials to build their own farmhouse on a 40-acre home site on 17-Mile Road in upper Arapahoe. Harry and Irene remained in the farmhouse until they retired from farming and moved to Riverton in the fall of 1976.

Harry carried his love for farming into retirement as he enjoyed planting and harvesting a big garden each year. Being the generous man he was, he gave away flats of vine-ripened, red tomatoes as well as other produce. Harry and Irene’s love for flowers was evident all around the perimeter of their house, but he was especially proud of his geraniums, some of which are over 25 years old. Harry and Irene won the “Yard of the Month” award several times over the years, not only for their beautiful flowers but for Harry’s green, healthy lawn which always looked freshly manicured.

Harry enjoyed traveling with Irene in their motor home, enjoying winters in California with Irene’s sisters and summers fishing at Boysen, as well as camping at Worthen Meadows with friends and family. His favorite season was spring when he was always eager to get his garden seeds germinated and growing in the house before transplanting to the garden outside.

Family was a big part of Harry’s life. He enjoyed spending time with everyone, and was very special to his grandchildren and great grandchildren. He responded immediately to any distress call he received whether it was to rescue a vehicle that wouldn’t start, or to fix a tool or appliance. He gave generously of his time and talent in fixing anything that was broken, whether it was for family, friends, or people he didn’t even know. He modified anything that already worked to make it work better. His home inventions are evident all throughout his home and yard.

Harry was preceded in death earlier this year by his wife of 68 years, Irene; his parents, and his brothers and sisters.

The family would like to extend special thanks to all the family and friends who showed their love and support during this difficult time. A special thanks to Harry’s wonderful friends, Jo Ann Ramsey, Bruce Hughes and Evelyn Kier.

Memorials may be made in the form of donations to Help for Health, 716 College View Drive, Suite B, Riverton.

Online condolences may be left at www.thedavisfuneralhome.com.