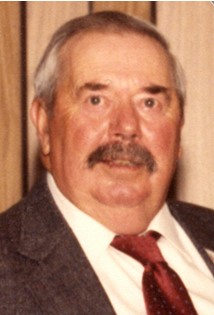 Guestbook 5
Robert C. "Bob" Dalley of rural Riverton died on Sunday, Jan. 6, 200,8 at Riverton Memorial Hospital at the age of 86. Services will be conducted by Bishop Wendell Richardson at the Church of Jesus Christ of Latter Day Saints, 4th and Elizabeth Drive in Riverton at 10 a.m. on Thursday, Jan. 10, with burial to follow at Mountain View Cemetery. The Wyoming Army National Guard will provide military Honors. A viewing will be from 5-8 p.m. Wednesday, Jan. 9, at the Davis Funeral Home of Riverton. Robert Curtis Dalley was born in Salt Lake City, Utah, on April 21, 1921, to O.M. and Hazel (Curtis) Dalley. His boyhood years were spent in the Driggs, Idaho area. The family moved to Riverton in 1935. He was graduated from Riverton High School with the Class of 1939. He served in the U.S. Army Air Corps during World War II and was a waist gunner on a B-17. Flying out of England, the crew flew missions over Germany. He was discharged from the military in 1946. He was married in June of 1948 to Bonnie Dietrich in Riverton. Their union was later solemnized in the Idaho Falls Temple. He was an active member of the Church of Jesus Christ of Latter Day Saints, serving as a High Priest group leader. Following the war, he purchased a farm in Riverton Valley and was engaged in farming and ranching. He also had water well drilling business and developed wells for a large number of homes in Fremont County. He, along with his brother, Jim Dalley, owned and operated a sheep shearing operation for many years. Survivors include his wife of 59 years, Bonnie, of Riverton; children, Debbie McClure and husband Richard, Brad Dalley and wife Beverly, all of Riverton; grandsons, Matt Dalley of Missoula Mont., Nate Dalley and wife Mikal of Riverton, Jake and Mike McClure of Laramie; a brother, James Dalley and his wife, Joanne of Riverton; sister, Colleen Fuller and husband Ivan of Provo, Utah; great grandchildren Niko, Chase and Brianna Dalley of Riverton; numerous nieces and nephews. He was preceded in death by his parents, O.M. and Hazel Dalley; a brother, Lester, and sister, Shelley. On-line obituaries are available and condolences for the family may be made at: thedavisfuneralhome.com. Services are under the direction of the Davis Funeral Home.