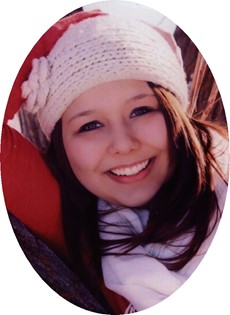 Guestbook 5
Moeniqa Produit, 18, of Kemmerer, WY, formally of Riverton, died on Saturday, December 28, 2013. A Prayer service will be held on Thursday, January 2, 2014, starting at 7:00 pm, at Blue Sky Hall with a Wake to follow. A funeral service will be held on Friday, January 3, 2014 at 10:00 am at Blue Sky Hall with Reverend Patricia Bergie officiating. Burial will follow at the Hudson Cemetery.

Moeniqa Diane Produit was born January 20, 1995 in Great Falls, MT to Raymond Produit Jr. and Stacy Marie Wilcox. Shortly after she was born she moved to Riverton with her parents. She attended schools in Riverton until she was 16 years old then moved to Kemmerer and lived with her father, stepmother, brother and sister. She graduated from Kemmerer High School in May 2013. She was attending the University of Wyoming with plans on becoming a Social Worker and Counselor to help young kids.

She was an enrolled member of the Northern Arapaho Tribe and her given Indian name was Biixounou, which means Eagleplume.

Her family said that she was a very loving, caring, high-spirited young woman. She loved the outdoors, shopping, basketball, cooking and learning to cook new foods. She played the piano and the flute for the school band. She also loved to help people, hangout with her friends, animals, (especially the family cat, Sunshine), and above all she loved her brother and sisters and all her family.

She is preceded in death by her sister, Michelle Allen; her grandfather, Raymond Produit, Sr.; her cousins, Kay Johnson, Herschel Amos, Holly Trosper, and numerous aunts, uncles, and cousins.