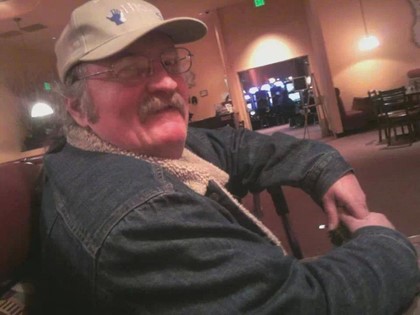 There will be a carry in dinner, “Birthday Celebration” at the Riverton Eagles F.O.E. #3036 in Riverton after the service, it will start at 4:00pm and go until 7:30 pm. All family and friends are invited .

Kevin Eugene Paslay, Sr. was born on January 21, 1960 in Roundup, MT to Perry Eugene and Edith Faye (Goodwin) Paslay. He graduated from high school in Roundup, Mt as the Honorary Valedictorian. In his early 20’s he moved to Riverton. He then received his CDL from the JETS Truck Driving School.

He worked for numerous oilfield companies, mainly in Wyoming, over the last 30 years. A tragic oilfield accident left him disabled and he was no longer able to work.

He was baptized into the Methodist Faith.

His family said that he was proud of his country and to be an all American Boy, and being an oilfield “Roughneck”. He enjoyed playing the guitar and harmonica, writing poetry and music lyrics, working on his vehicles, collecting cars and trucks. He loved visiting and being around his family, friends, his oilfield friends, and getting people to laugh. His family said he had a kind heart and was always a giving person. There was a special bond between Kevin and his daughter, Sara, they loved each other deeply. He loved all of his children and was loved by them.

He was preceded in death by his parents, Perry and Edith Paslay; his brother, Jerry Michael Knight; and his sister, Mary Fay Norris.