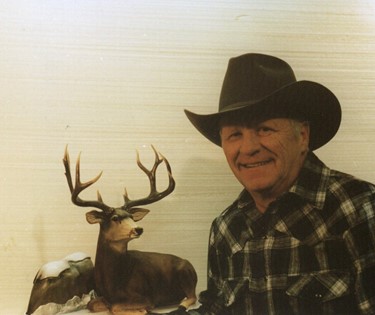 Guestbook 5
Royl C Dvergsdal, 76 of Dubois, died at his home on Monday, January 13, 2014. As were his wishes, he has been cremated. A memorial service will be held on Saturday, January 25, 2014 at 2:00 pm at Mt. Calvary Lutheran Church in Dubois, WY. Pastor Roger Sterle will officiate. Dubois Ramar Brown Post #10056 V.F.W. will perform military rites.

Royl Curt Dvergsdal was born on October 13, 1937 to Rolf and Mildred (Madson) Dvergsdal in Ladysmith, WI. He was raised in Waukesha County and attended school in Hartland, WI.

He was a member of the Mt. Calvary Lutheran Church of Dubois, WY.

After leaving the service he worked as a machinist in Waukesha. In 1968 he came to Riverton, Wyoming to visit an Uncle, liked it so much he decided to stay. He worked many different jobs in Riverton, including 3 years as a police officer with the Riverton Police Department. He was a graduate of the Wyoming Law Enforcement Academy in Douglas, Wyoming. In 1975 he moved to Dubois, Wyoming where he lived until his passing.

While in Dubois, he served 8 years with the Fremont County Sheriffs office and for 18 years he owned and operated Indian Ridge Archery. He also was instrumental in organizing the Dubois Search and Rescue in 1981.

His family said that he enjoyed hunting, fishing, carving wood, archery, NASCAR, and was an avid Green Bay Packer fan. In his own words “I have five wonderful grandchildren and two children that I love to spend time with.”

He is survived by his son, Justin (Amy) Dvergsdal of Dubois, WY; his daughter, Erica (Jason) Harker of Riverton, WY; his grandchildren, Nicholas Dvergsdal, Seth Dvergsdal, Codi Raymond, Garrett Raymond, and Kaycee Harker; and his sisters, Clarene Daily and Cheri Peckam, both of Hartland, WI.

He was preceded in death by his parents, Rolf and Mildred Dvergsdal.