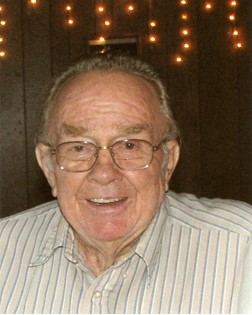 Guestbook 6
Floyd J. Wicks, 86 of Riverton, died on Saturday, January 18, 2014, at the Wind River Healthcare in Riverton, surround by his family. As were his wishes, he has been cremated. A memorial service will be held on Saturday, January 25, 2014, at 2:00 pm at Davis Funeral Home. Pastor Echo Klaproth will officiate. Riverton Elks Lodge #1693 will do the funeral rights at Davis Funeral Home. TheMarine Corp League #683 will do military rights at the cemetery. Inurnment will follow at Mountain View Cemetery.

Floyd Joseph Wicks was born on December 2, 1927 in Casper, WY to Franklin J Wicks, Jr. and Ione Marie (Harrison) Thoren. He graduated from Natrona County High in Casper with the class of 1945.

He served in World War II and the Korean War with the U.S. Navy, he was then honorably discharged. While in the service he earned the American Theatre Medal and the World War II Victory Medal.

He married Delores Daniels on March 26, 1949. Together they raised four daughters and one son. They later divorced. He then married Helen (Scheeler) on November 1, 1970; she passed on March 6, 2010.

Before he entered the U.S. Navy, he worked for CB&Q Railroad. After he was discharged, he went to work for Standard Oil Company as a welder. In 1959 he went to work for Union Carbide and helped start the Gas Hills Mill. He started with them as a welder and advanced to Maintenance Lead Man. After much training he became the Safety Manger and was in that position until he retired.

He was very involved in his community. He was Governor of the Casper Moose Club #1182 from 1958-1959. In 1959-1960 he was the President of the Wyoming-Nebraska Moose Association. He was a life member, 43 years, of the Riverton Elks Lodge #1693. He was President of the Local Petroleum and Nuclear Association with Union Carbide Company; he was also the fire chief for the Union Carbide Mill. While at the Union Carbide Mill, which is in both Fremont and Natrona County, he was a Deputy Sheriff for Natrona County.

His family said he enjoyed bowling, golfing and gardening. He was a Master Gardner. He loved watching his children, grandchildren, and great grandchildren participate in sports. He so enjoyed just being around his family and friends.

He was preceded in death by his parents, a brother, William Wicks; his son, Floyd J. Wicks, Jr.; his son in law, Steve Wilson; and numerous aunts and uncles.