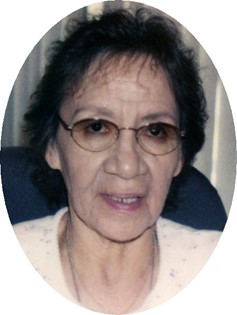 Alice Patricia Addison was born on February 24, 1939 in St. Stephens, WY to Joseph Addison and Susan Grace (Sitting Eagle) Blackburn. She attended school in St. Stephens and graduated from St. Stephen’s High School. She then went to school in Bismarck, ND where she earned her L.P.N.

After earning her L.P.N. she was employed by I.H.S. for more than forty years. In her younger days, while raising her family, she traveled for I.H.S. from one reservation to another all over the western states, stretching from Alaska to Oklahoma. She always came back to the Wind River Reservation. The last job before she retired was with Morning Star Manor at Fort Washakie, WY.

She was a devoted Catholic, who did rosary daily, and also a strong member of The Native American Church. Her Indian name is “Gros Ventre Woman”

In 1981 she married Gilbert Chavez, they were married for 20 years before divorcing, but remained close friends.

Her family said that she loved playing solitaire and other computer games, was always watching the W.W.E. on T.V., but above all she loved her grandchildren and being around them.