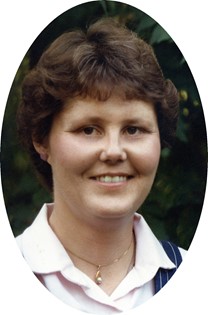 Rebecca Rae Galles was born May 18, 1952 in Riverton to William and Wyoma (Wiseflog) Galles. She was a lifelong Riverton Resident graduating from Riverton High School and the University of Wyoming.

Mrs. Campbell married Steven E. Campbell on July 22, 1973 in Riverton at St. Margaret’s Catholic Church. The couple were members of the St. Stephen’s Catholic Church where they were active in many parish functions and helped with the angle tree.

Mrs. Campbell worked at the James H. Moore Career Center where she organized career courses for the school district. She later taught 4th, 5th, 6th grade math courses at Jefferson Elementary until she became ill in May of 1989.

The family said she enjoyed the family cabin and their tradition of snowmobiling every year above Lander to get a Christmas tree. They said she enjoyed sewing, decorating and doing crafts with her mother-in-law, working on the family farm where they raised sheep. She had been a 4-H leader for the “Sage Brush Kids.”

Memorials may be made to Tough Enough Cancer Fund in care of the Davis Funeral Home, 2203 W. Main Street, Riverton, WY 82501.