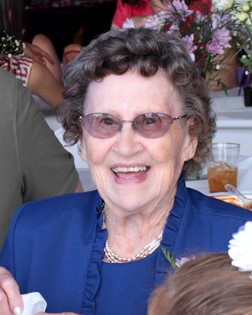 Guestbook 11
Elizabeth Mae “Betty” Bogacz of Riverton died on Saturday, February 22, 2014 at the Help for Health Hospice Home in Riverton, WY. She was 89.

Funeral services will be held on Friday, February 28, 2014, at 11:00 am at St. Margaret’s Catholic Church. Prior to the funeral service, a viewing will be held from 10 –10:45 a.m. at the Davis Funeral Home. Burial will be at Mountain View Cemetery.

Elizabeth was born in the rural Riverview community of Riverton, Wyoming on February 16, 1925 to E.W. “Jim” Beckman and Melba (Gilliland) Beckman. She was raised on the Beckman farm along with two sisters, Doris and Wilma Jean. She attended Riverview School and graduated from Riverton High School in 1943.

She was a life-long resident of Fremont County and especially proud of her pioneer heritage. Her grandparents, William and Andrea Gilliland were original 1906 homesteaders.

She married Edward L. Bogacz on February 15, 1943 in Pavillion, WY. They moved to a farm near Pavillion in 1951 where they raised a family of five girls along with the garden, crops, chickens, sheep and cattle. She moved to Riverton in 1973 and lived there until the time of her death.

She worked as a shipping clerk for the Sears Catalog store until retirement and was also a clerk for the Fremont County Fair. She especially enjoyed the flower show, 4-H, and open class foods. She was an active and dependable member of the Riverton Cow-Bells, Fremont County Cattle Women, and Wyoming Cattle Women as well as the VFW Ladies Auxiliary and Eagles 3036 Auxiliary.

An avid bowler, she bowled on several leagues each week until the local lanes closed. She had enjoyed traveling to several national competitions with her team. She was also a wonderful cook and enjoyed crocheting, embroidery, gardening, and classic country music.

Family was of the utmost importance in her life and her home was often the center for family gatherings. She was also fondly known as Grandma “B” and Aunt Betty and will be dearly missed.

She is survived by a sister, Wilma Jean LeVan and husband Donald of Charlottesville, VA; her five daughters, Lynette Diefenderfer and husband Richard of Eaton, CO, Sue Bogacz of Cheyenne, WY, Becky Anderson and her husband Neal of Pavillion, WY, Ladonna Good and husband Ray of Riverton, and Kendra Bogacz of Riverton; her seven grandchildren, Rich Diefenderfer, Andrea and Karl Rusch, Brittany and Brian Bartow, Troy and Shelle Anderson, Brooke and Darren Nogle, Courtney and Bret Ladenburger, and Levi Good; and nine great-grandchildren.

She was preceded in death by her parents, Jim and Melba Beckman and her sister, Doris L. Johnson. Memorials may be made to Help for Health Hospice, to Fremont County Fair, or any Veterans organization in care of Davis Funeral Home, 2203 West Main Street, Riverton, WY 82501.