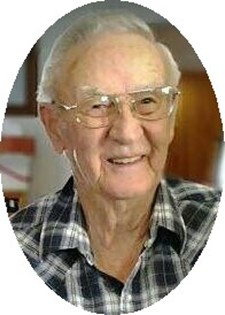 Robert “Bob” Moore 87, of Shoshoni, died at the Wyoming Medical Center in Casper on Friday, February 28, 2014. Funeral services will be held on Wednesday, March 5, 2014 at 11:00 am at the Shoshoni Senior Center. Burial will follow at Lakeview Cemetery with full military committal honors. Viewing will be held Tuesday, from 5 p.m. to 6 p.m. at Davis Funeral Home.

Robert Lee Moore was born on May 30, 1926 in Whitman, WY to Ralph Arthur and Blanche Kathryn (Burke) Moore. As a young child he lived in many different areas in WY and attended many schools including, Van Tassell, Whitman, Indian Creek, Rawhide Butte, West Lance Creek, Manville Public School, Lusk Public Schools and eventually graduating from Riverton High School. He then attended Casper College.

He served with the U.S. Army during World War II in the European Theater.

On July 9, 1947 he married Ellen Clauniece Eggers in Riverton, WY. Together they raised four sons, Robert, Kenneth, Norman, and Vernon.

His family said that he enjoyed camping, hunting, fishing, and water skiing. He was also a long time hunting guide.

He is survived by his wife of 66 years, Ellen Moore, of Shoshoni; his sons, Kenneth R. Moore, Norman H. Moore, and Vernon L. Moore; his sisters, Bernice Hardman, Margueritte Walters, Katherine Rice, and Nellie Barrows; his 12 grandchildren and 17 great grandchildren.

He was preceded in death by his parents, Ralph Moore and Blanche Wise; his brothers, Howard Wise and Ray Moore; his sisters, Caroline Spargur and Barbara Hyatt; his son, Robert B. Moore; and his daughter-in-law, Gayle Moore.

Memorials may be made to the Shoshoni Senior Center in care of Davis Funeral Home, 2203 West Main Street, Riverton, WY 82501.