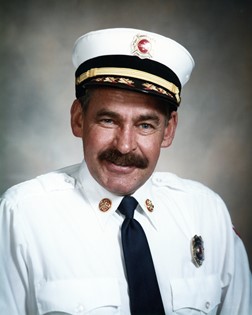 Lawrence Harold Hunter was born in Riverton on April 13, 1937, to Lawrence Willard Hunter and Bertha Margaret (Whittemore) Hunter. He grew up in Riverton, and was graduated from Riverton High School with the class of 1957. He remained a lifelong resident.

In 1957 he married Donna McCoy and they had two children. They were later divorced.

On January 11, 1969 he married Carolyn Foster at the United Methodist Church in Riverton. Together they had two daughters. They were also later divorced.

Larry's life in the workforce was varied and included many years as a carpenter, building contractor and carpet layer. He was a Fremont County Deputy Sheriff from 1971 to 1977, at which time he started Hunter Construction. He retired from the City of Riverton as a water treatment plant operator.

Larry's greatest joy in life was his membership in the Riverton Volunteer Fire Department. He joined the department in August of 1966, attaining the offices of Maintenance Lieutenant in 1970, Rescue Captain in 1971-72, Fire Captain in 1973-74, Assistant Chief in 1975-76, and was Chief of the Department in 1977 and 1978. Following that time he fulfilled the position of Trustee from 1979-1982, Battalion Chief in 1982-83 and Aid to Chief from 1984-1996. In 1974 he received the Citation of Merit award. During his tenure, he was a member of the Drill Team competing at many state conventions. He retired from the department after 30 years of active service in August of 1996. Subsequent to his active service, he continued to assist the drill teams as a driver and offering his support in all their endeavors.

Mr. Hunter was preceded in death by his parents; an infant son Michael; a sister Margaret Irene; a brother Jim; and sister-in-law Babe.

Memorial donations may be made the Riverton Volunteer Fire Department, in care of the Davis Funeral Home, 2203 West Main, Riverton, WY 82501.

On-line condolences may be left at www.thedavisfuneralhome.com.