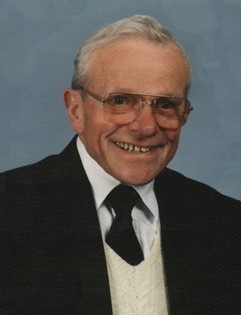 Guestbook 0
Jim Durbin of Riverton died Monday at Riverton Memorial Hospital at the age of 90.

Funeral services will be at 10 a.m. Thursday, Jan. 17, at St. Margaret's Catholic Church in Riverton. The Rev. Father Drew Duncan will officiate.

Military committal rites will be by the Wyoming National Guard. Interment will be at Mountain View Cemetery in Riverton.

There will be a rosary at 6 p.m. Wednesday, Jan. 16, at the Davis Funeral Home of Riverton.

A dinner at the church will follow Thursday's service.

Mr. Durbin was a business owner and engaged in sales. He owned and operated The Foodliner in downtown Riverton from 1956 to 1964.

He served with the U.S. Navy during World War II, being honorably discharged on Nov. 27, 1945.

He was a member of the Catholic faith and served as an usher at St. Margaret's Catholic Church in Riverton.

He was a member of the B.P.O.Elks Lodge and the Veterans of Foreign Wars.

He was preceded in death by his wife, Dorothy Durbin; his parents, Charles and Agatha Durbin; a brother, Lloyd Durgin; sisters, Hope O'Connor, Grace Durbin (cut off bottom of page,) and Sister Mary Hope B.V.M

Memorials may be made to St. Margaret's Catholic Church or St. Stephen's Mission Foundation.