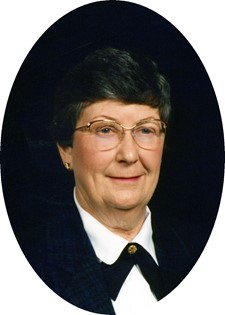 Guestbook 5
Willa Leaming passed away on March 20, 2014. She died of age related causes.

Willa Jean McKee was born on December 4th, 1929 in Eldorado, Oklahoma to Dean and Anna McKee. She had two sisters: Francis Edmonson and Susan McKee who preceded her in death. She graduated from Laramie High School in 1947 and married Tom Leaming in Laramie in 1948. They moved to Riverton where Tom lived and managed the family hardware store for many years.

Willa was a wonderful wife, mother, house keeper and had a heart for volunteer work, especially in healthcare. She was a Red Cross Gray Lady in the Riverton Hospital and other care facilities until they were disbanded and she continued volunteering at the hospital for more than 50 years until she was physically unable. Having been a breast cancer survivor, she led an American Cancer Society support group and provided individual support for women suffering from the trauma of breast cancer. She responded to women in distress 24 hours a day. She was a member of the United Methodist Church in Riverton for 65 years and was a long-time member of the church choir and bell choir. She was a life-long member of The Order of Eastern Star and was a past Grand Matron. She also enjoyed flower gardening and playing the piano.

Willa is survived by her husband Tom of 65 years; a son, Herb, of Eugene, Oregon; grandchildren Justin Juve of Riverton (who has spent the last 11 months living in the family home caring for Willa); Monica Taulbee-Leaming of Farmington, New Mexico; Jessica Paul of Portland, Oregon and 4 great grandchildren. She was preceded in death by her daughter Patricia Leaming in 2001.