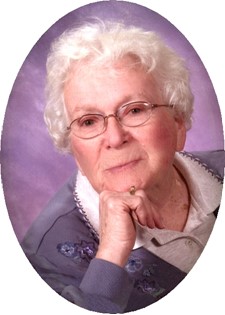 Cecilia Marian Dean was born on September 12, 1925, in Ogden, Utah to Helen Roberta (Hufstetler) Dean and William Edward Dean. She was one of ten children, eight girls and two boys. She graduated from Ogden High School, class of 1944.

On November 21, 1945, she married Gerald Howard Heninger in Ogden and honeymooned with her loving husband at the Ambassador Athletic Club in Salt Lake City. They lived in Salt Lake and Springville, Utah before moving to Lander, Wyoming in 1962. Gerald preceded her in death on March 21, 1969. Marian and Gerald raised six children, three girls and three boys.

She was very proud of her children and their families.

She is survived by sons, William Robert (Annie) Heninger of Longmont, CO, Alan Dean (Sheila) Heninger of Bakersfield, CA and families, daughters, Carol Adriane Kennerk (Steve) of Lander, WY, Connie Rae Cassidy (Paul), Albuquerque, NM and Paula Kay Morrow (Wade), of Casper, WY. Her children and their families loved her very much. She enjoyed and was proud of her 13 grandchildren and 5 great grandchildren. She is also survived by her sisters, Vivian Joyce Boyington, Dorothy (Dot) Roberta Dean and Norman Kay Dean of Ogden, UT, Francis Beryl Biederman of Rantoule, Illinois and brother-in-law, Dick (Sheral) Heninger, and her beloved nieces, nephews, and their families.

Her eldest son, Bruce of Orangeville, CA preceded her in death on July 21, 2010. She was also preceded in death by her brothers, Ed and Bill Dean and sisters, Margaret Weaver, Mildred Brown and Barbara Vlaanderen.

In lieu of flowers, the family requests donations be made to the Lander First United Methodist Church kitchen fund.