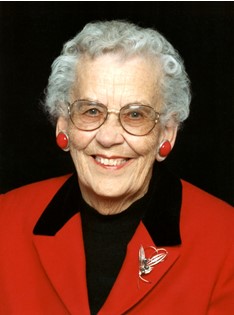 Gwen N. Samuelson was born on November 30, 1923 in Litchfield, NE to Samuel Walter and Hilda Marie (Von Krosigk) Samuelson. She was one of five children; she had three brothers and one sister. The family moved to the Riverton area where she attended schools, graduating from Riverton High School with the Class of 1942.

She married Fred L. Nicol on December 11, 1944 in Alexandria, LA, where he was stationed with the Army Corp of Engineers. Together they raised three children, Fred, Bob, and Connie. They ranched near Mill Creek for over 30 years until they retired in 1993 and moved to Lander.

Her family said she enjoyed crocheting, reading and loved being around her grandchildren.

She is survived by her sons, Fred (Alice) Nicol of Riverton and Bob (Detta) Nicol of Fort Washakie; her daughter, Connie Rowan of Rawlins; her brothers, Walter (Donna) Samuelson of Casa Grande, AZ and Louis Samuelson of Casper; her sister, Margaret Wenner of Logunawna Ligwell, CA; her seven grandchildren and her twelve great grandchildren.

She was preceded in death by her parents, Walt and Hilda Samuelson; her husband, Fred Nicol; her grandson, Wayland Nicol; her son-in-law, Dean Rowan, and her brother, Brice Samuelson.

Memorials may be made to the People of Courage Fund at Central Wyoming College, in care of Davis Funeral Home 2203 West Main Street, Riverton, WY 82501.