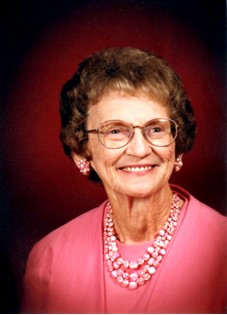 Maxine Ilene Geist was born on December 24, 1923 in Gardner, KS to Clifford Charley and Lucretia Mae (Murphy) Geist. When she was four years old her family moved to Orchard, NE for a short time and then to Long Pine, NE where she was raised and went to school. Maxine always said “it was a great place to grow up”.

On May 8, 1940 in Ainsworth, NE, she married Elvin Carpenter. They lived twenty-five miles south of Bassett, NE on a ranch for four years before moving back to Long Pine, NE in 1946. On March 4, 1948, they moved to Riverton and they raised their two children, James and Janice.

Maxine was a member of Trinity Lutheran Church. She taught Sunday School, Vacation Bible School and sang in the choir. She was a very active member of L.W.M.L. (Lutheran Woman’s Missionary League) and held several officer positions.

She was preceded in death by her husband, Elvin Carpenter; her father, Clifford Geist; her mother, Lucretia Mae Geist-Brown; her stepfather, Arveen Brown; her brothers, Jerry Geist and Ralph Geist; and her sister, Shirley Wiedeman.