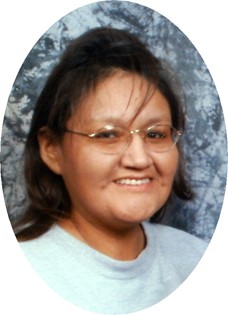 She died April 16th 2014 at the Riverton Memorial Hospital.

She attended St. Stephens Indian School and graduated from Wyoming Indian High School. In 1985, she attended the INMED Summer Institute at the University of North Dakota.

Juanita worked as an assembler with PerTech, Case Worker and Administrator for General Assistance Program with Northern Arapaho Dept. of Social Services.

She enjoyed doing beadwork, reading, watching t.v., going to the casino, attending pow-wows and visiting with family. Those close to her enjoyed her sense of humor. She loved spending time with her grandchildren, Lianna Bell, Jordan Bell and Leiloni Oldman. She was a loving and caring person who always took time to help out her family. She especially enjoyed being a mother and grandmother.