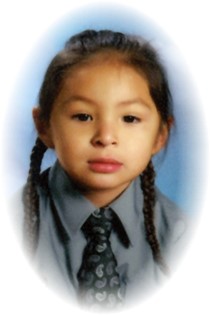 
Steven Travis Warren, 4 of St. Stephens died on April 28, 2014 in Laramie, WY. A rosary will be held on Sunday, May 4, 2014 at 7:00 pm at the Judy Warren residence located at 1300 Quiver Lane. A wake will follow at the Jerome and Sara’s residence located at 764 Rendezvous Road #7. A funeral mass will be held on Monday, May 5, 2014, at St. Stephen’s Catholic Church with burial at the Arapaho Catholic Cemetery.

Steven Travis Warren was born on November 6, 2009 in Riverton, WY to Jerome Henry and Victoria “Sara” Jean Wilson-Warren. He attended the home base program with Arapahoe Headstart.

His family said that he loved playing basketball, playing with “his guys”, small action figures, wrestling with his brothers and cousins, swimming at the beach and lake, and hanging out with his family, especially his siblings and cousins. His favorite figure was Mickey Mouse.

He was preceded in death by his grandparents, Thomas Durgin, Vearle Wilson Sr., and Linda and Paul Revere; his great grandparents, Patsy Behan, Anthony SittingEagle, Steven SittingEagle Sr., Hubert and Inez Warren; his uncles Terry Coulston, and Lloyd James Warren; and all other grandparents, aunts, uncle and numerous other family members.