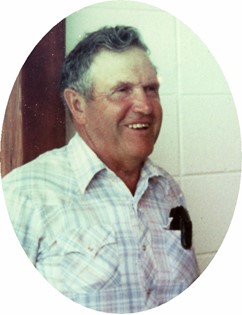 Francis Marvin Mendenall was born on August 31, 1931 in Casper, WY to Cyrus Oscar and Christina Harriet (Deaver) Mendenhall. He was one of eleven children, six girls and five boys. When he was about four years old, the family moved from a homestead near Highland, WY to the Kinnear area. He attended grade school at the Riverview School and then attended high school at Morton School.

He was a member of the Sunnyside Nazarene Church. In the 1960’s he helped build the current church located in Kinnear. He also served as a board member, was an usher, and sang in the choir. He was very strong in his faith.

On June 20, 1953, he married his wife of 61 years, Connie Lou Hudson, at the, Sunnyside Nazarene Church in Kinnear. Together they raised four children.

He was a full time rancher and farmer along with working at Morning Star Dairy for 25 years. His family said that he loved every aspect of ranching and farming, and could even make water run uphill.

His family said the he loved horses, hunting, especially big game and pheasants. He loved being outside and having family around.

He was preceded in by his parents, Cyrus and Christina Mendenall; his sisters, Marie, Lula, Viola, Geneva, and Velma; and his brothers, Virgil, Horace, Paul and Walter.

Memorials may be made to the Options Women’s Clinic of Helena, MT(website: optionswomensclinc.com) or the Sunnyside Nazarene Church in care of Davis Funeral Home, 2203 West Main Street, Riverton, WY 82501.