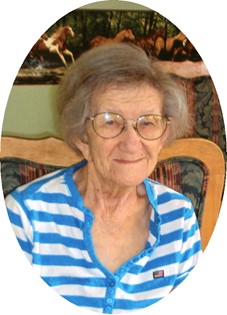 Aletha Ruby Bugher was born in Riverton on April 7, 1921 to Sylvia (Griffey) Bugher and Archibald Bugher, Sr. She was raised on the family farm on Riverview Road along with her three siblings. She spent her childhood helping her parents with the gardening and raising milk cows. She also loved spending time with her grandparents, Lorenzo and Alice Griffey on their farm called “Griffey Hill” where they homesteaded in 1910. She attended schools in Riverton and graduated from Riverton High School, class of 1939.

Aletha met the love of her life, Frank L. Boyd, while working as a waitress at the Blue Bird Café on Main Street. A year later, they were married on February 27, 1947. Frank entered the Army shortly there after. While he was in the Army, Aletha and longtime childhood friend, Kath McMillen, went to Denver, CO to work in the Naval Yard.

After Frank was discharged, he started his water well drilling business where she traveled all over Wyoming with him whenever he went to drill water wells. During this time, they had three daughters, Nancy Lee that was stillborn, Susan and Leanna. Years later they settled down on a small farm on 8-Mile Road. The raised large gardens and assorted animals but their prize possession was their peacocks. When Frank passed away on August 10, 1979, she remained on the farm tending to the animals and gardens. In 2005, she sold her beloved farm and moved into Riverton to be closer to family members.

Aletha loved her peacocks, dogs, Peggy Sue and Shadow, cats, Punky and Jinx. She valued her time with all her grand and great grandchildren. She loved doing crossword puzzles, going to bingo and yard sales. She was a good friend to her neighbors, inviting them over for coffee.

She was preceded in death by her parents, Archie and Sylvia Bugher; her husband, Frank Boyd; her infant daughter, Nancy Lee; two brothers, Archibald Bugher, Jr. and Cliff Bugher; and one sister, Alice Bugher.

With Aletha’s fondness of animals and strays, memorials may be made in to Paws and Claws Animal Adoption and Care Center, Inc in Diamondville, WY or PAWS for Life in Riverton, in care of Davis Funeral Home, 2203 West Main Street, Riverton, WY 82501.